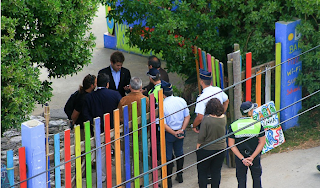 Yes, there is a man from behind it ... perhaps an animal!