this day the waves were a bit storm.cloudy and swell was growing fast.
i padled out by my self between to rocks,8 feet large behind the pic.
8 foot set almost smashed me on the rocks i made and went to the pic.
got 2 waves and 12 foot sets were starting to break and really hard to padle in cause rocks are very close to the take off.i got one more wave and left.when i was on the rocks a local boy bodyboarder,el pasteleiro,arrived. told him to don't padle out but he said new the spot.
he tried to go at the same way that i did,but a 12 foot set smashed him and pushed him to the clif under the pic.we lost him for ten minutes.we all were crying .Boardculture rep(tanaka) and local guy who took me there was calling the cops and crying. pastelerio came from no were in the midle of the clif.the waves smashed him on a cave that we didn't know and he survived.
Toxica is one of my destination for this winter.(padle and tow in) 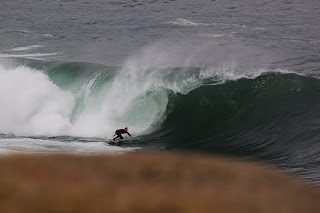